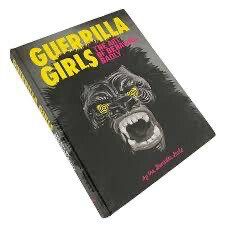 SKU 00031
$30.00
In stock
1
Product Details
Guerrilla Girls: The Art of Behaving Badly is the first book to catalog the entire career of the Guerrilla Girls from 1985 to present.  The Guerrilla girls are a collective of political feminist artists who expose discrimination and corruption in art, film, politics, and pop culture all around the world.  In 1985 they papered downtown Manhattan with posters calling out the Museum of Modern Art for its lack of representation of female artists.  They quickly became a global phenomenon, and the fearless activists have produced hundreds of posters, stickers, and billboards ever since. This book explores all their provocative street campaigns, unforgettable media appearances, and large-scale exhibitions. C aptions by the Guerrilla Girls themselves contextualize the visuals and the book e xplores their well-researched, intersectional takedown of the patriarchy

Save this product for later
Display prices in: USD