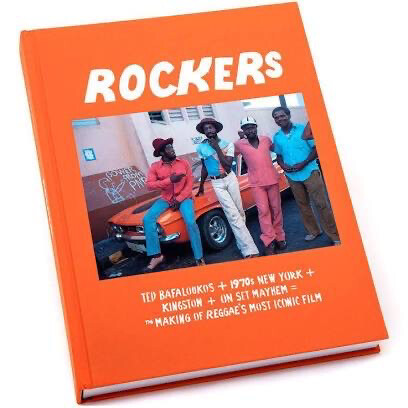 SKU 00030
$65.00
In stock
1
Product Details
Set amongst the reggae scene of late 70s Jamaica, the film  Rockers  achieved instant cult status among music and cinema fans.  Rockers’  director, Ted Bafaloukos has received many accolades for his work on the film, but the fact that he was also a fine writer and undercover photographer is often overlooked. Bafaloukos penned this vivid autobiography in 2005 and passed in 2016. Beyond Bafaloukos’ fascinating story of the “making-of”  Rockers , it tells the tale of a Greek immigrant from a family of sailors and his move to New York, eventually rubbing shoulders with the likes of The Velvet Underground, Robert Frank, Jessica Lange and Philippe "Man on Wire" Petit. But there's a twist to this 1970s' New York story: Bafaloukos fell in love with reggae when it was still just an underground facet of Jamaican culture in the City. His experiences in New York eventually led him to shoot  Rockers , praised for the portrait it paints of Kingston's late 70s music scene along with its unique style, mentality and fashion.
Save this product for later
Display prices in: USD